What is your ideal city?

If you could build a city in whatever way you wanted, how would you build it? How would people live, what type of transportation would you have?

When the group gathered for the first session of the day, they had to ask themselves these kinds of questions. This was because they were faced with the task of building models of their ‘ideal city’, using cardboard, coloured paper, paint, tape and glue. The groups solved this issue in different ways; however there were also some similarities between the models built. For instance, every group wanted a river, suggesting that water in a city is important for people in the group. There were also a lot of green spaces in every model, and room for sustainable transport, with a lot of bicycle lanes built in most models.

What we learned from the task was to realize what we want in a city to make it a sustainable one, and that a lot of the solutions to environmental (and other problems within our communities) already exist – they just need to be implemented. We also felt a sense of responsibility as activists to try to start implementing (as far as we are able to), and to campaign for these changes to happen. 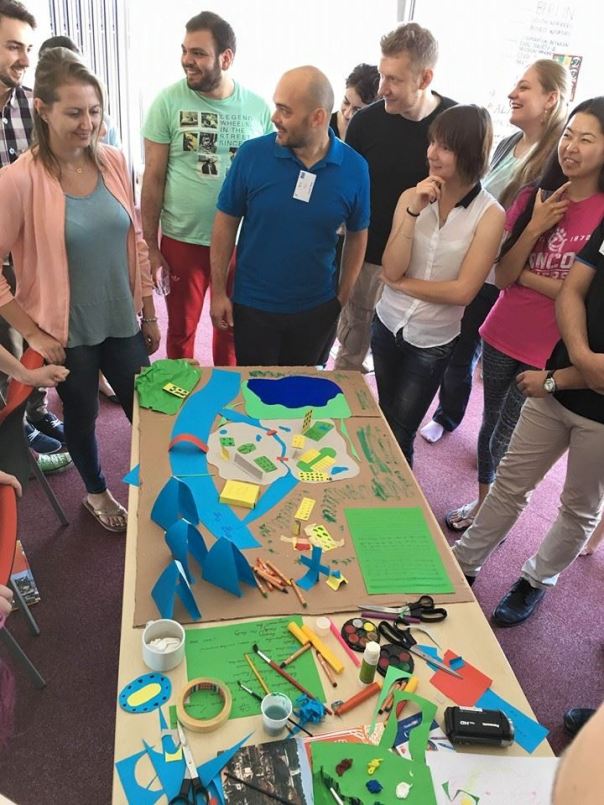 Imagine that you are a dog owner, living close to a park (which is the only green space in walking distance) where you walk your dog every day. An investor has recently arrived to the area, suggesting to build a shopping centre that will increase the levels of employment and hopefully make the area more developed, pointing out that the park is very run down and that not many people go there, whereas a shopping centre would attract loads of people.

Now imagine that you are a shop owner, having a shop in the park which at the moment is doing all right (you are popular among the residents in the area, but do not have many ‘outside’ customers), but could perhaps be doing better if you could move your store into a new shopping centre that would attract more customers.

Or perhaps you are a green activist – pointing out that there should rather be money invested into making the park nicer by building benches, cleaning it from trash and renovating the playgrounds, so that more people want to go there. You want to improve biodiversity and fight consumerism, and therefore do not want a new flashy shopping centre to be built.

Maybe you are an elderly person, who do not want too much noise in the park, but still want somewhere you can go for walks. Or you are a Conservative politician, wanting more voters. Or you are the investor, who want to make more money believe that your investment could provide benefits for the community living around the park.

During the second session, the group was divided into small groups, and not knowing that each group were given the same situation, were appointed these different characters and had to act out a council meeting and make a decision on the issue (whether a shopping centre should be built, or if the park should be kept).

After the role play, we gathered in a big circle and discussed the outcome from each group. As we all had (without knowing) played out the same situation, it was interesting to see how the groups had solved the dilemma in different ways. In every group, there had been an alliance between the conservative politician and the investor (who both had more votes in the final voting), but in some groups there had also been an alliance of the dog owner, the green activist, the old man and sometime also the shop owner, with the outcome of keeping the park. However, in many of the cases there was the outcome of the shopping centre being built because of the failure of the opposition to overcome their individual differences. This task was therefore very useful to reflect upon how to effectively build an alliance, in order to reach the goal of one’s campaigning.

After lunch, the Scottish activist Tracey Wheatley (now based in Wekerle, outside Budapest) told her story about how she became an activist and then got us to reflect on her motivation for becoming an activist, and also group dynamics according to ‘Integral theory’ invented by Ken Wilber.